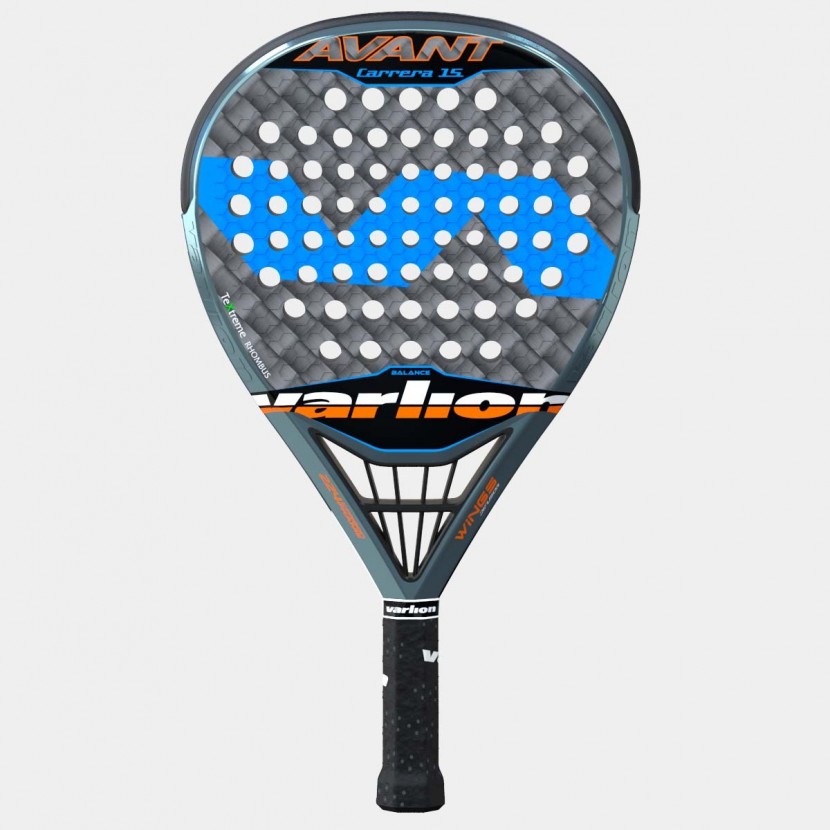 This product is no longer in stock

TEXTREME RHOMBUS CARRERA 15
Fabric produced by a carbon yarn with a treatment by tow spread. A system developed and registered by Oxean Co (Sweden). This fabric is de carbon fiber fabric for the sport industry and F-1 cars/Teams but with a development and production under the characteristics each customer wants.
TeXtreme closed an exclusive deal with Varlion in 2017 to produce and develop our own carbon fabrics for our Summum, Super Pro and Pro lines: the TeXtreme Rhombus 25, TeXtreme Rhombus 15 and TeXtreme Quattro, an agreement between two leader Co into the Sports Industry in the world.
Is more resistant and compact working in same weight level and with it we reach a very good new touch in our padel rackets Summum and Super Pro of new collection.

TEMPERATURES
The temperature has a direct influence in the technical level of the padel racket, changing its hardness or flexibility; this causes our game to change and be unstable. To minimize this problem, Varlion launched the same racket with two different constructions, suggesting you to use one to play depending the temperature you have at the moment you will play:

GRADUAL HOLES
Drilling technology using three sizes of holes making them smaller in the central area (10mm), medium in the middle as we move away from the center and approach the frame (11.5mm) and bigger in the perimeter area closer to the frame (13mm), to balance the excessive flexibility of the core in the middle with the low one near the frame. It allows to have a greater homogeneity in the shots and an increase the shock-resistance of the core.

HEXAGON FRAME
Hexagonal frame whose to give a greater rigidity, strength and aerodynamics to the racket. It's registered and exclusive of Varlion.

Self-adhesive bumper produced by an injection mold in TPU with low hardness to absorb shocks and friction.
It is fixed on the padel racket’s frame by an adhesive material, and is not necessary to fix it drilling  the frame. With it, you will not have possible vibrations of the bumper and a full join between it and the frame.

ECONAKED
Technology based in an ecological design (hence the word "Eco") thanks to the reduction in more than 75% of the use of paints and solvents in the decoration and finished of padel rackets. On the other hand, the word "naked" refers to the padel racket are shown as they come out from the mould, so the consumer can see 90/95% of the fabrics with which the padel racket it is made.

WINGS DIFUSOR
Technology developed to improve the air flow trough the heart of the padel racket.

Its design is inspired by the diffuser included for Brawn GP Formula 1 Team on the back and plain bottom of the car.

New Super Pro tear-shaped padel racket by Varlion to get a balance between control over power. It is the Avant H Difusor Carrera 2016/17 successor.

Manufactured by a reinforced carbon fiber bidirectional tube, and a 38 mm EVA Hypersoft laminated core with plain fabric of TeXtreme Rhombus Carrera 15 carbon fiber, whose mechanical and strength characteristics are better to the carbon fiber fabrics used up to now. Reinforced in the core with 224 carbon fiber fabric. Impregnated with Varlion exclusive VAR-FLEX epoxy resin -to get the highest elasticity and resistance- covered by a dioxide titanium layer.

Among the innovations, even the new fabrics, we have:

Hexagon frame, diffusor and injected self-adhesive protector are models registered at the Spanish Patent and Trademark Office and are therefore the exclusive property and use of Varlion.

No customer reviews for the moment.

2 other products in the same category: